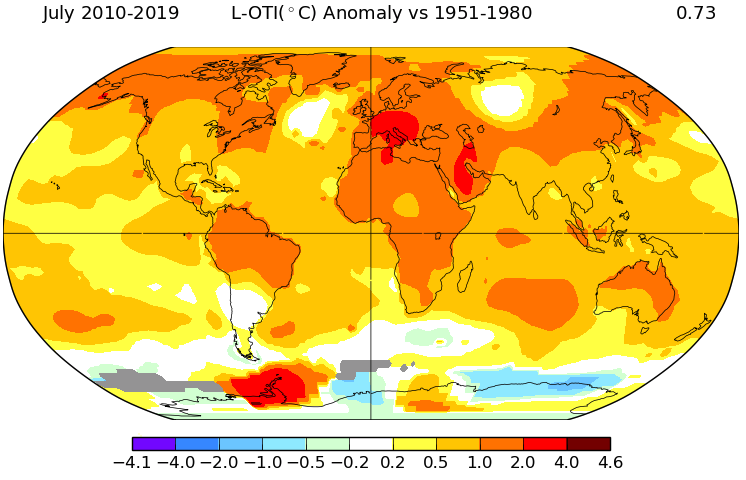 Where has recent warming been the strongest? What else do you notice regarding spatial patterns of warming?

Ok, did you come up with an explanation? There are several long standing explanations for the pattern listed below. New mechanisms have been uncovered in recent years so even if your explanation isn’t on the list below its possible future research will support your explanation.

It was long assumed that the biological impacts of climate change would be more severe in temperate and polar regions than in the tropics due to larger temperature increases. Many studies have indeed documented biological changes in the far Northern Hemisphere, but recent research examining how organisms respond to temperature changes questions the initial assumption.

One way to gauge the impacts on organisms is to estimate how temperature changes rates of metabolism, which is sometimes referred to as the “fire of life”. Metabolism is the biochemical process by which organisms combine food with oxygen to release energy. “Metabolic rate tells you how fast the animal is living and thus its intensity of life,” said study co-author Raymond Huey, a University of Washington biology professor. Increases in metabolism can require organisms to spend more time eating or conserving energy, reducing time and energy available for other processes. 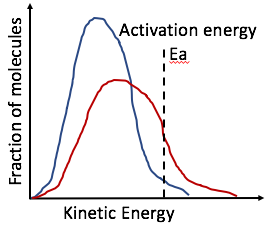 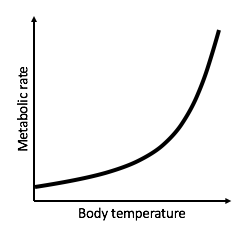 Larger organisms require more energy, but they also gain some efficiency with size. Metabolic rate (MR) thus increases as a power of body mass (M): MR ~ Mx. The precise value of x and the explanation for the value is a longstanding research topic. One source of efficiency is the scaling of surface area and volume. An animal’s surface area increases as the square whereas volume increases as the cube of its length. So larger animals have a lower ratio of surface area to volume, which decreases rates of heat loss from the surface. This source of efficiency would suggest that MR ~ M2/3. However, higher values around ¾ are often observed. One theory termed the Metabolic Theory of Ecology uses vascular branching patterns within organisms to argue the scaling is MR ~ M¾.

You can read this article to learn more about how body size and temperature determine metabolic rate.

Does climate warming increase energy use more in tropical or temperate regions?**

A team at the University of Washington led by then graduate student Michael Dillon, who is now a professor at the University of Wyoming, set out to quantify how fast climate warming would increase rates of energy use in different regions of the earth. The researchers used nearly 500 million temperature readings from more than 3,000 stations around the world to chart temperature increases from 1961 through 2009, then examined the effect of those increases on metabolism. What they found surprised them. We’ll use a visualization to recreate their analysis.

As a preliminary step in creating the visualization, weather stations were selected to represent a wide range of latitudes across multiple climate zones. The map below depicts which climate region each station is located in. These weather stations were determined by data availability from the beginning of the traditional reference period for climate studies (1961) until the current year (2020).

The visualization below allows you to examine how temperatures and estimated rates of metabolism have shifted over recent years at different locations across a variety of climate zones. See text below for more information and a guided tour.

The legend located to the right of the plots specifies the weather station corresponding to each color and allows you to select specific stations. Double-click on “Danmarkshavn, GL” to isolate that weather station. Notice how the scale of the middle subplot automatically adjusts to become more readable. Double-click the location again to display all locations.

Notice that the averages for each subplot is plotted every five years and are represented by separate data points. The length of the date interval (x-axis) can be adjusted using the buttons in the top left corner. You can also adjust the date range by dragging the vertical bars in the interactive slider labeled “Date” located below the plots. To reset the range, hover over the plot and press the house icon that appears in the top right corner.

Lastly, you can choose which taxonomic group (ex: unicells, plants, etc.) you would like to graph by clicking the plot settings button.